Angel card readings can be very helpful tools to connect you with your spirit guides and angels.  Angel cards haven’t been around for centuries like Tarot cards have been. They only burst upon the scene about 25 years ago. 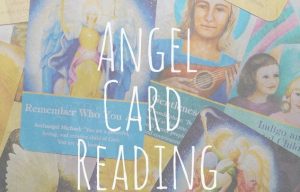 One of the first deck of angel cards was a “messenger” deck that consisted of photographs of flowers as angelic messengers. Just prior to that there was a product (not really a “deck,” per se) of very small little angel cards with uplifting and inspirational messages now called “The Original Angel Cards and Book Set.” You would just pick one and that would be your angelic message for the day. They are still available today.

More well known and coming out around 1994 was a deck of angel cards called Voice of the Angels – A Healing Journey Spiritual Cards by Dyan Garris. These were hand illustrated in bright watercolors and made with crystals. They had verses that were channeled in quatrain by Garris (a psychic medium) from seven archangels who were the “voice” in her angel cards.

She also had a journal, original music, and a guided meditation to go along with the cards.  She developed 12 “spans” or spreads/ways to lay out the cards for your angel card reading.  Sadly, her cards are now out of print, (there seems to be some used decks out there as available) but she still has four free angel card readings online on her website and offers them in both Spanish and English.

Somewhere then after all of that, in the late 1990s came along the first Doreen Virtue angel cards, published by Hay House, which have now expanded into many, many angel card decks and they are the most well known in terms of angel card decks. These are slick cards, larger in size than a traditional Tarot deck, and manufactured on a heavier card stock.  Most of the graphics were designed by a now well known angel artist.  These cards had/have  messages from angels and daily inspiration.

A lot of people prefer angel card readings to Tarot card readings because angel cards tend to not have cards with negative or scary imagery such as we find in the Tarot.  Also angel cards are used primarily as a means of receiving direct messages from your angels and connection to the Divine, that you may not normally be able to hear on a daily basis, as opposed to as a bridge to the subconscious mind or subconscious elements as in Tarot.

Both angel card readings and Tarot card readings can be very accurate and helpful.  Tarot can be helpful if you come to understand the imagery and learn to interpret the more negative images and messages as simply “the other side of the coin,” instead of allowing yourself to be knocked off your center if you receive a card in a reading that is scary, such as the Death card. Instead of “physical death” or the “unknown” simply learn to interpret it as “transformation,” and you’ve got the idea.

Should You Get a Psychic Reading?